The demand for water is increasing due to population growth and technological development whereas water is becoming a scarce resource. There is an urgent need to find innovative solutions for water loss in water supply systems. Most water meters don’t measure low flow rates (less than 12 liters per hour). The innovative solution, UFR (Unmeasured-Flow Reducer), is a product of A.R.I. Flow Control Accessories. Its main objective is to reduce the apparent losses by changing the flow regime through the water meter at low flow rates. This reduces the volume of unmeasured water at low flow rates and enables the measurement of leaks by a domestic water meter. This paper shall review water meter accuracy curve error,reduction of apparent losses using the UFR - function and case studies conducted around the world.

Apparent losses (often referred to as non physical, paper losses or commercial losses) are in many cases the most expensive water losses that a water system will encounter. The water meter is the cash
register of the water utility and therefore any losses occurring from the meter or the handling and processing of the data thereafter will be lost at sales revenue value per unit of measure (Thornton and
Rizzo. 2002).

Water meter accuracy error is considered to be a significant component of the apparent losses in a water system. The error curve of the water meter (figure 1) can affect the unregistered water volume.
Every meter type has its own rate of degradation of the accuracy with time. The meter may be influenced by external parameters such as the quality of water (scale, sand etc.) and suspended particles. 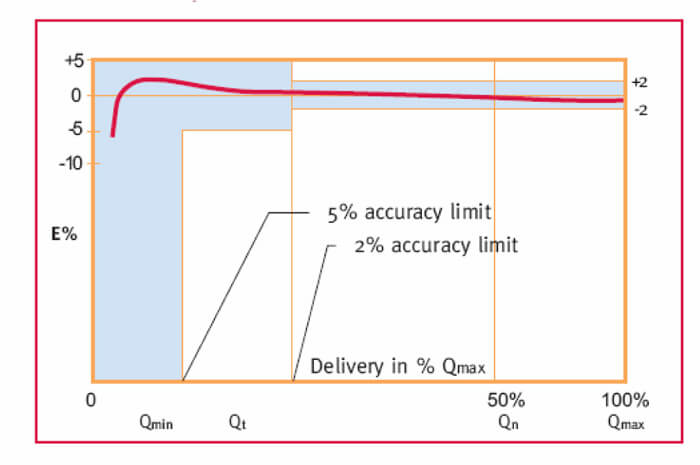 ISO standard (ISO 4064-1, Second edition, 1993) defines the performance of any type of water meter by looking at 4 main points along a flow range: Qmin, Qt, Qn, Qmax. It doesn’t mention anything regarding the starting flow (usually one third of Qmin), which the water meter starts to measure. Qmin is the minimum accurate flow, accuracy of ±5%. Qt is the transitional flow, at which the meter will be stable in performance, accuracy of ±2%. Qn is the meter’s nominal flow. Qmax is the maximum flow; it is determined as being twice the nominal flow. Figure 1 shows the ideal scenario for a brand new meter (Multi-jet class B), older meters will have an accuracy curve that is shifted outwards from the ideal ±2% accuracy band. The variability at low flows is much greater than at medium and high flows, the error curve is steep until reaching the minimum flowrate. Consequently the uncertainty about the real performance of meters at low flows will always be greater than at higher flows (Arregui el. 2006).

Most domestic water meters are usually of the velocity types: single jet, multi-jet; Positivedisplacement: oscillating piston and nutating disc. Velocity meters are affected by flow distortions or dimensional changes in the meter that may interfere with the internal velocity of the flow passing through the instrument. Velocity meters are also sensitive to any increment in the drag torque on the sensor element especially at low flows. An incorrect mounting position of the water meter increases the friction of the moving parts. The effect is only noticeable at low flows for which this term is relevant in the effective drag torque. If the mounting position is not correct, according to the manufacturer recommendations, it may lead to a higher degradation rate of the meter. The wear on the moving parts increases the error at low flows (figure 2). Deposits may cause over registration, at medium-high flows and under registration at low flows. However, on the long term, deposits grow so large that they can prevent the impeller from rotating, temporarily or permanently, causing a severe under registration of the meter (Arregui el. 2005).

Positive-displacement meters are mainly used for domestic uses due to their excellent sensitivity to low flow rates and high accuracy across a wide range of flow rates. A known volume of liquid in an enclosed compartment moves with the flow of water, and the flow rate is calculated based on the number of times the compartment is filled and emptied. A reduction in the actual volume of each
compartment is impossible, for this the meter will stop. Therefore, over-registration will not occur and the error curve will become more negative (under-registration) (figure 2). Consequently, these meters
tend to under-register actual water usage when they become older and excessively worn. 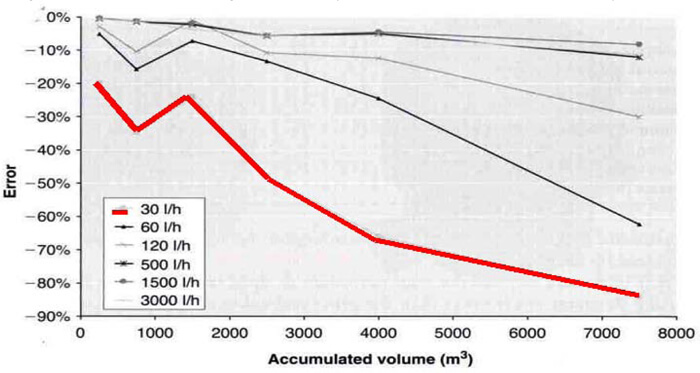 Water consumption at low flows is the most difficult to measure. As it can be seen in the accuracy curve of any water meter, measuring errors are much larger in this range. Under these working conditions, the energy transfer from the fluid to the sensing element is very small and any increase in friction, caused by any factor, may stop the impeller or the piston at lower flow rates. For that reason, the under-registration expected from a meter installed by a user that consumes a great amount of water at low flows is very high. Furthermore, considering that the accuracy of a water meter degrades at a faster rate at low flows, this under-registration will increase more rapidly than in other type of users (Arregui el. 2006).

Figure 4 indicates the effect of a roof tank ball valve on the flow profile of a normal domestic household. An indirect plumbing system usually consists of the household kitchen fed straight off the inlet mains pressure whilst the rest of the household is fed via gravity from a roof tank. It is the slow closure of the roof tank ball valve that induces flows that are lower than the starting flow of the water meter, as shown in Figure 4 above. The larger the surface area of the roof tank or the higher the starting flow Qs of the meter, the larger will be the resulting meter under-registration (Rizzo and S. John, 2006). 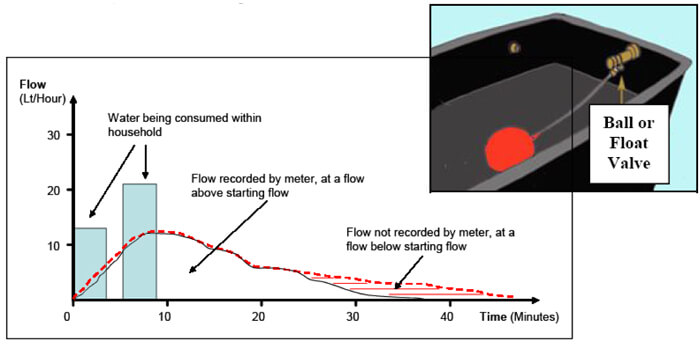 Figure 4: The effect of a roof tank on meter under-registration (Rizzo and S. John, 2006)

Figure 5 indicates the result of repeated tests carried out on standard 1m3 roof tanks. Data logging was carried out on water meters positioned upstream and downstream of the roof tank. The logic to these
tests was that, whilst the water meter installed upstream to the tank would substantially under-register due to the ball valve effect, the water meter downstream of the tank would work fairly accurately. This
would be because most of the outflows from the tank would be above Qs or even above Qmin. Results confirmed that the downstream readings were over 6% higher than the upstream readings, indicating
that the upstream meter was under-registering by over 6% of daily consumptions due to the ball valve effect. Replacing the new upstream meter with aged meters (having greater wear) produced underregistration figures ranging from the initial 6% to up to 95%. All tests were carried out using Class D (Qn = 1.0m3/Hr) volumetric water meters (Rizzo and S. John, 2006). 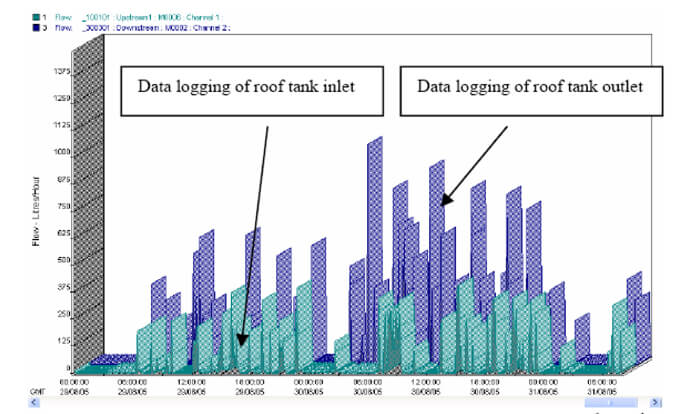 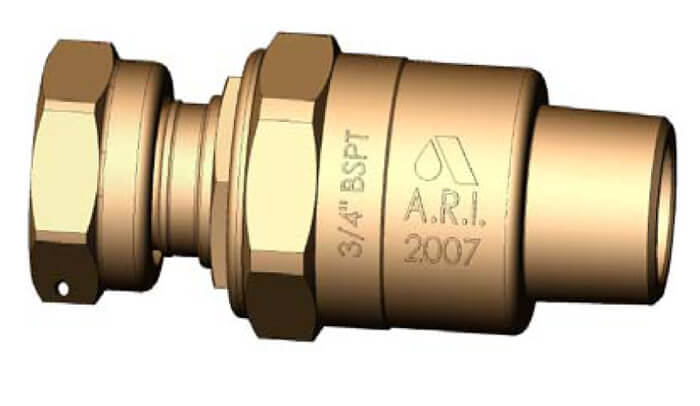 The UFR regulates the water flow so that there is no water flow at all part of the time, while the rest of the time, the flow is high enough to be measured. Changes in the flow discipline at low rates allow the
existing water meter to measure at all water flow rates passing through it. When the flow rate increases over the water meter’s measuring threshold, the UFR remains permanently open, so that it does not
interfere with measurements. The UFR also acts as a non-return valve and prevents backflow (it closes when the downstream pressure and upstream pressure are equal).

The UFR is a differential non-return valve, designed in such a way that the pressure difference required to open it is more than that required to keep it open. The pressure difference to open the UFR is 0.4 bar, whilst the pressure difference to keep it open is 0.1 bar. When a leak develops (a flow rate below the measurement threshold of the water meter) the downstream pressure drops. When the downstream
pressure drops below 0.4 bar of that of the upstream pressure, the UFR opens and allows for a flow rate above that of the measurement threshold (figure 8). The free flow of water through the UFR equalizes
the pressure across the UFR and allows it to close (figure 9). The continuing leak downstream to the UFR will make this operation repeat itself over and over again. Every time the UFR opens, a quantity
of water passes through the water meter at a flow rate above the measurement threshold of the water meter and so the flow is measured.

The main purpose of the case studies was to answer the following questions:

A statistical test is conducted to find out if there is unmeasured flow passing through the water meter at low flow rates. The test procedure is as follows:

In order to determine the contribution of the UFR, the following steps are taken:

This case study was conducted in Ranana, Israel from May 2007 to February 2008. The DMA contains private houses and buildings with 40 UFRs. The water meters in this DMA are multi jet, Qn 2.5 class B
(figure 10). According to table 1 the contribution of the UFR was 9%.

Table1: Ranana results with and without UFR 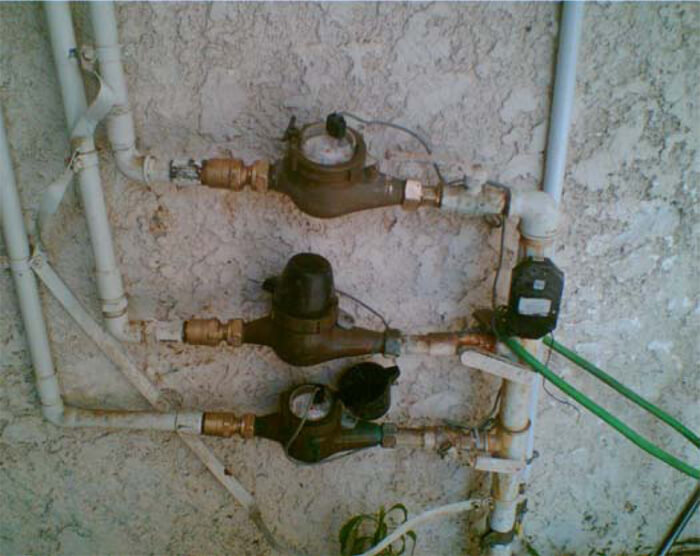 The under registration percentage was recorded prior to and after the installation of the UFRs and is a comparison of the sum of the domestic water meter readings to that of the main water meter of the
DMA. Table 2 summarizes the results of this study. The average contribution of the UFR was 8.5%.

Table 2: Study results with and without UFR

This case study was conducted in Larnaka, Cyprus from October 2006 to December 2006. The DMA contains a variety of households: private houses, buildings and houses with roof tanks. The water
meters in this DMA are as shown in figure 12. 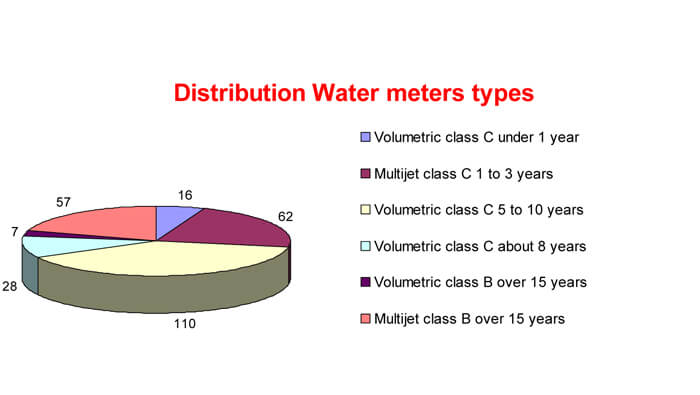 Figure 12: Distribution of Water meters types in the DMA

Weekly reading were taken beore and after the installation of the UFRs. According to Table 3, the contribution of the UFR was 9.93%.

Table3: Larnaka results with and without UFR

The national water utility in Malta identified a small zone for pilot study purposes. The zone was chosen in accordance with the ages of the water meters in the zone, allowing for a normal distribution of meter ages with and average of five years in age. Poezija zone has 26 domestic consumers with volumetric class D (Qn=1 m3/hr) water meters and roof tanks on the buildings (figure 13). The UFR units increased the metered volume of water by a substantial 5.5% to 6% of the water supplied to the zone (Table 4).

Figure 13: The pilot zone (left) where the UFR (right) was installed in Malta

Leakages and other unmeasured water flows at low flow rates were found in many of the households tested. The UFR succeeded in the reduction of unmeasured flow and was found very effective in reducing apparent losses. The UFR had a significant effect on the flow registration of the water meter. The UFR increased the water meter registration by 5% to 10%. 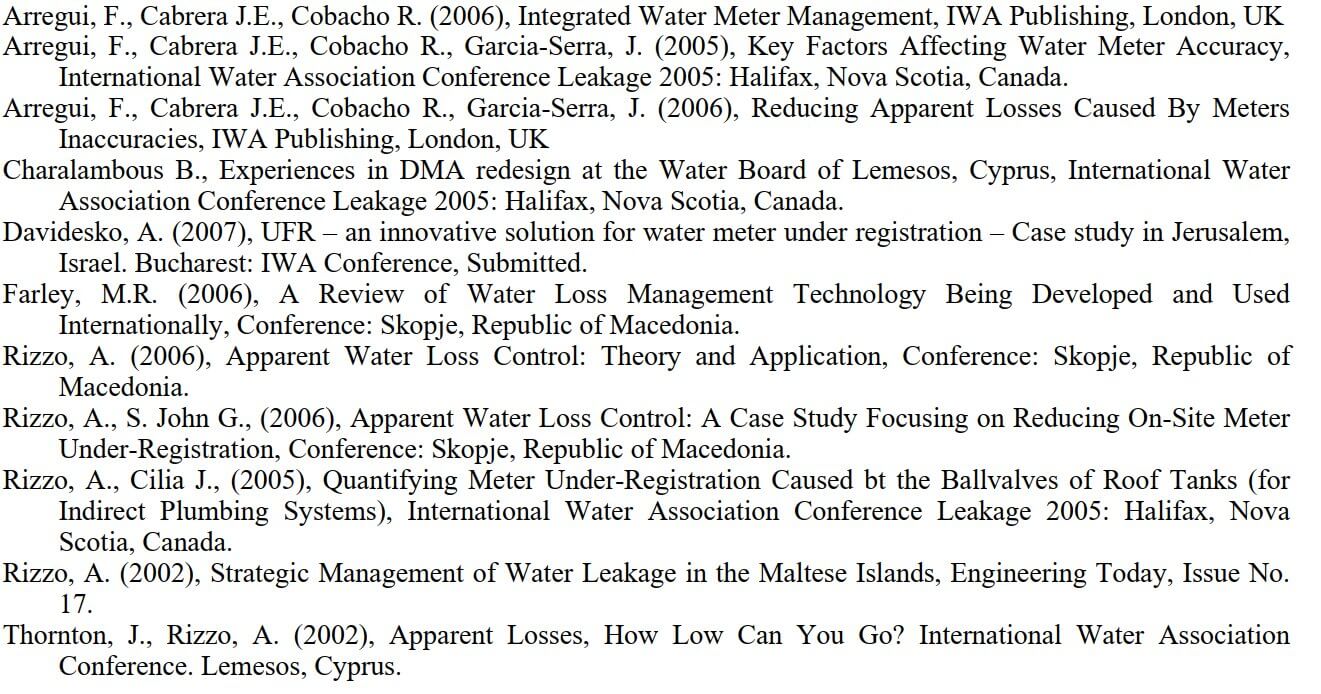