During the last two years, Palermo Water Utility and Palermo University have been investigating the under-registration of customer meters installed upstream of private storage tanks and the effect of introducing Unmeasured Flow Reducers (UFRs). The first series of tests consisted of measurements (inlet pressure, tank inflow, tank outflow) for two individual users located in different situations (a family
villa and a separate condominium). The meter under-registration was monitored and calculated over a period of approximately a week. UFRs were then installed, and the test repeated, to allow the benefit of UFR installation to be quantified in each case. A second and different type of comparison, based on introduction of UFRs to a small District Metered Area (DMA) was carried out in late 2008, and the analysis (using a software specially developed for such test) has been carried out. The experimental campaign showed that UFR can effectively reduce water meter under-registration even if it can have a limited impact in those cases in which water meters age is excessively high.

Water supply system management has to be based on a deep knowledge of its cost, of the network water and energy consumption and of the level of water losses. Every leakage control program has a water system balance as a common starting point (Ismail and Puad, 2006). As reported in the IWA Standard International Water Balance (IWA, 2000), water losses can be computed as the difference between System Input Volume and Authorized Consumption and consists of Real Losses and Apparent Losses. Real losses are the volume lost through all types of leaks, bursts and overflows on mains, service reservoirs and  ervice connections, up to the point of customer metering while Apparent losses consist of Unauthorised Consumption and all types of metering inaccuracies (Lambert, 2002).

This volume may have a great impact on the company water balance and economic balance and water utilities have great interest to recover it.

Apparent losses are caused by water thefts, meter reading and billing errors, meter under-registration (Rizzo et al., 2007). Water thefts arise from illegal behaviour of users being connected to the network without authorization, bypassing or damaging customer meter. Meter reading and billing errors are due to human errors: meter can be misread and volume data can be wrongly charged in the water utility billing system. Meter under-registration is brought about by intrinsic errors affecting water meter and changing with flow rate passed through it.

There are several possible reasons leading customer water meters losing their efficiency, some of which are: meter wear and tear, demand profile or demand type problems. Ageing or an excessive abrasion of meter moving parts often lead to under-register; private roof tank interposed between the customer meter and the points of use modify the standard demand profile of domestic users laminating the
instantaneous water demand, reducing the flow rates passing through the meter and so increasing metering errors. In short, while water thefts, meter reading and billing errors are directly related to water utility management and may be removed by improving company procedures, water meter inaccuracies are considered to be the most significant cause of apparent losses and the hardest to quantify and reduce (Rizzo and Cilia, 2005).

In order to assess the share of water consumption that is registered by the meter and so the percentage of customer meter under registration, two parameters are needed: the metrological performance of the meter at different flow rates and the standard domestic consumption profile which is modified due to private tank lamination effect in case of presence of customer storage tanks.
The performance of any type of meter can be described by the mean of key flow values (see figure 1.1) identifying different operational fields on the meter performance curve (European Committee for Standardization, 2005). 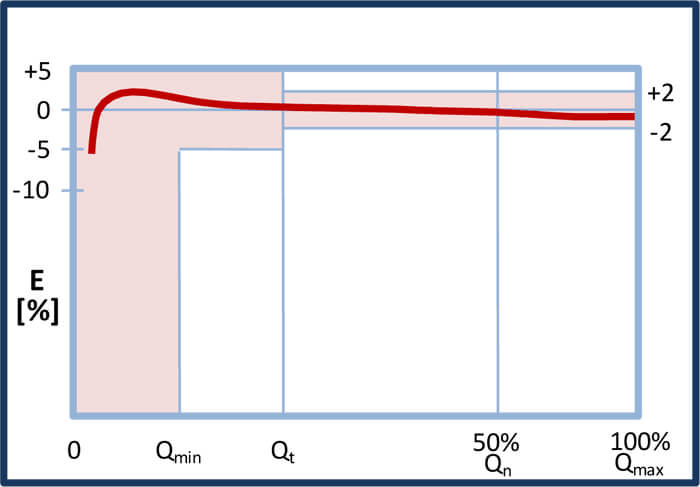 The first value is the start-up flow rate (Qa), a flow below which the water meter registers no consumption at all. When the flow is equal to the Minimum flow rate (Q1) or Qmin the meter error should be within ±5%. When the flow is equal to the transition flow (Q2) or Qt, the meter reaches its maximum accuracy and its error is about ±2%. Then we have the nominal flow (Q3) or Qn, being half of the maximum
flow (Qmax).

When flowrate through the meter is lower than Q1, meter error increases very rapidly. When an old customer meter is coupled with a private water tank, it may not register even more than the 50% of volume passed through it.

The effect of private tank on customer meter under registration can be evaluated analysing its emptying – filling cycles produced by a float valve inducing flows lower than meter start-up flow rate.

Several hydraulic devices appeared on the market in the last few years, trying to control and reduce apparent water losses connecting with meter inability to measure low flow rates. A possible solution to cope with private water tank lamination effect is the introduction of pulsing valves modifying the tank filling process. The UFR (Unmeasured Flow Reducer) installed upstream or downstream the customer meter changes the way the water flows through it: at low flows the UFR causes water to pulse through the meter at values above the start-up flow rate, at higher flows it allows water to pass undisturbed.

In the last two years, Palermo Utility and Palermo University have been investigating the under-registration of revenue meters installed upstream of private storage tanks and the effect of introducing Unmeasured Flow Reducers (UFRs). The first series of tests consisted of measurements (inlet pressure, tank inflow, tank outflow) for two individual users located in different situations (a family villa and a
separate condominium). The meter under-registration was monitored and calculated over a period of approximately a week. UFRs were then installed, and the test repeated, to allow the benefit of UFR installation to be quantified in each case.

The results of these tests, which were quite diverse, are described, and suggestions given relating to additional information needed to fully interpret further tests of this type.

A second and different type of comparison, based on introduction of UFRs to a small District Metered Area (DMA) was carried out in late 2008. Results are presented and analysed.

In order to evaluate the capability of the UFR to reduce apparent losses connected with the effect of private tank on meter under-registration, a field monitoring campaign on 2 households of the city of Palermo (Italy) has been carried out.

The selected households (A and B) have suffered intermittent distribution in the past and, for this reason, the users adapted to the unreliable water distribution service by building local reservoirs. In the last 5 years, higher water resources availability and improved system performance greatly reduced the areas of the city where intermittent distribution is still an issue; nevertheless, many users still maintain local
reservoir for increasing their resilience to water scarcity.

The campaign has been composed of two periods: in the first period, water volumes, recorded upstream and downstream of the tank, network pressure and tank water level (at only one household) have been measured before installing UFR device, in the second after its installation. In both the households the customer meters (also named revenue meters) are between 5 and 10 years old.

Instrument packs set up have been made up of: a pressure sensor, a level meter based on a pressure cell and two new and calibrated class C volumetric water meter (Figure 1). The pressure sensor has been installed upstream the customer meter to measure and record network pressure data every 15 minutes at different flow rates. Each class C flow meter (diameter 15 mm) coupled to a data logger storing volume data every minute have been installed upstream and downstream the private tank.

The installation has been made according to the specifications of European Committee for Standardization (2005). Finally, at only one household, tank water level has been measured by the pressure cell level meter coupled to a data logger storing data every 15 minutes.

The first and the second monitoring periods of household A lasted 6 days, respectively from 14th to 20th December 2007 and from 7th to 12th February 2008. Network pressure data showed the household A has always been supplied by the public network during the two monitoring periods. Therefore, before UFR installation, the roof tank was always full, the float valve was partially open and flow through the
meter into the tank was at very low flowrates.

Household B monitoring periods took place from 25th October to 6th November 2007 and from 20th to 26th March 2008. At the end of the first period (before UFR installation), the difference between volume data recorded by the two new water meters installed upstream and downstream the private tank was about -12%.

This result was due to pressure network values, equal to zero during day time and sufficient to take water from the network from about 6 pm to 10 am. Therefore the tank is partially emptied by the user during the period of low pressure and no service and then it is rapidly refilled during the late afternoon when pressure increases.

At the end of the second period, characterized by the presence of an UFR device, cumulated volumes recorded by the new water meter upstream the private tank have been higher (about 8%) than downstream ones (see Table 1.1). This occurrence depends on the effect of UFR on allowing water passes at values higher than meter starting flow, on the downstream meter inability to measure flow lower than start-up flow rate (Qa) and on the phase displacement between tank emptying – filling up.

Table 1.1 Measured volume upstream and downstream of the private reservoir

This district was completely renewed in 2002 by substituting the old distribution cast iron mains ruined by time and by corrosion with a system of new polyethylene PE100 pipes. The SDMA identified is made by 434 m of pipelines DE110 and 14 service connections which supply 52 end users.

The following test methodology has been applied to test the viability of the Unmeasured Flow Reducer (UFR) in the SDMA. Methodology include a total of 5 sequential steps described below.

Step 1 - Consumer Audit
Test in the field confirmed that the zone is hydraulically encapsulated and that all the consumers are metered and no meter is blocked. A computer database (in excel) was build to allow to keep track of these metered consumers, in parallel with existing billing data.

In order to improve reliability of test a checklist of actions has been prepared and applied to zone as described in following figure. 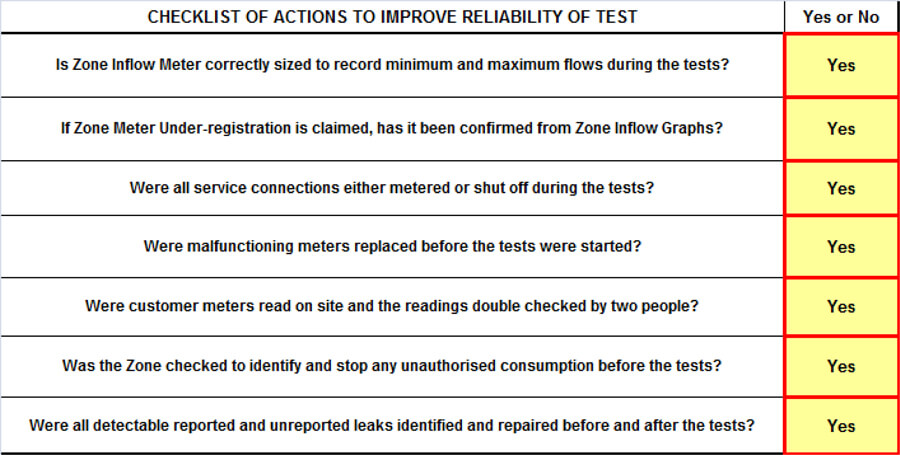 Figure 1.4 Checklist of actions for field test in trial zone

‘Noce Uditore’ zone has been selected also because all mains and connections have been recently replaced and there are no existing leaks in the system.

The Field test is executed in two stages as follows. In the first stage readings of the consumer meters and the zone master meter are taken before and after a two weeks period.

AMAP Palermo used the software UFRCalcs developed by ILMSS Ltd (Allan Lambert) to implement a methodology to calculate zone balance and compare Customer Meter Under-registration (CMU) with and without UFRs.

This study investigates possible solutions to water meter under-registration in households characterized by the presence of local private reservoir. Apparent losses due to under-registration are relevant in these cases mainly because of the presence of floating valves which make a relevant part of the flow entering the private reservoirs at low flow rates even lower than the start-up flow rate of the water meter.

Following the above tests and results achieved, AMAP Palermo is now aware that Customer Meter Under-registration can be drastically reduced with a combined strategy including economic meter replacement plan and installation of UFRs.

Above management policy, which is actually under development, will include economic evaluation of costs and benefits considering deterioration of meters accuracy, meter replacement costs and economical data such as sale price of water, presence and influence of storage tanks, cost and effectiveness of UFR installation, etc.