This article is the outcome of a team of water engineers, written with the specific aim of integrating the many
managerial and technical issues that relate to Apparent water loss control.

Water losses are grouped into two types of loss; Real losses, which are the physical losses (or leakage) and Apparent losses, which are caused by revenue meter under-registration, water theft and billing errors. Whilst Real losses are an expense due to lost water, Apparent losses are not so much an expense to the water utility as they are a loss of potential revenue. Apparent losses relate to water that is being consumed, but not being paid for. Thus for every cubic metre of water unbilled as a result of an Apparent loss, the water utility loses the opportunity of collecting money for that cubic metre of water. The article will describe the 4 types of Apparent losses and shall guide towards building a holistic strategy for quantifying and controlling Apparent losses. It is hoped that the audit exercise described at the end of the article should clarify the various intangible issues relating to Apparent water losses. The article is segmented into three areas. These are: understanding a multidimensional problem; an Apparent loss control strategy; and how to carry out an Apparent loss control audit.

Within the IWA’s Water Loss Task Force, a team of international practitioners have dedicated numerous hours over the last five years to studying the phenomena of Apparent losses. Various conclusions have been drawn. As a start, Apparent losses have been clearly defined as constituting four components, and that these components can act and interact interchangeably. 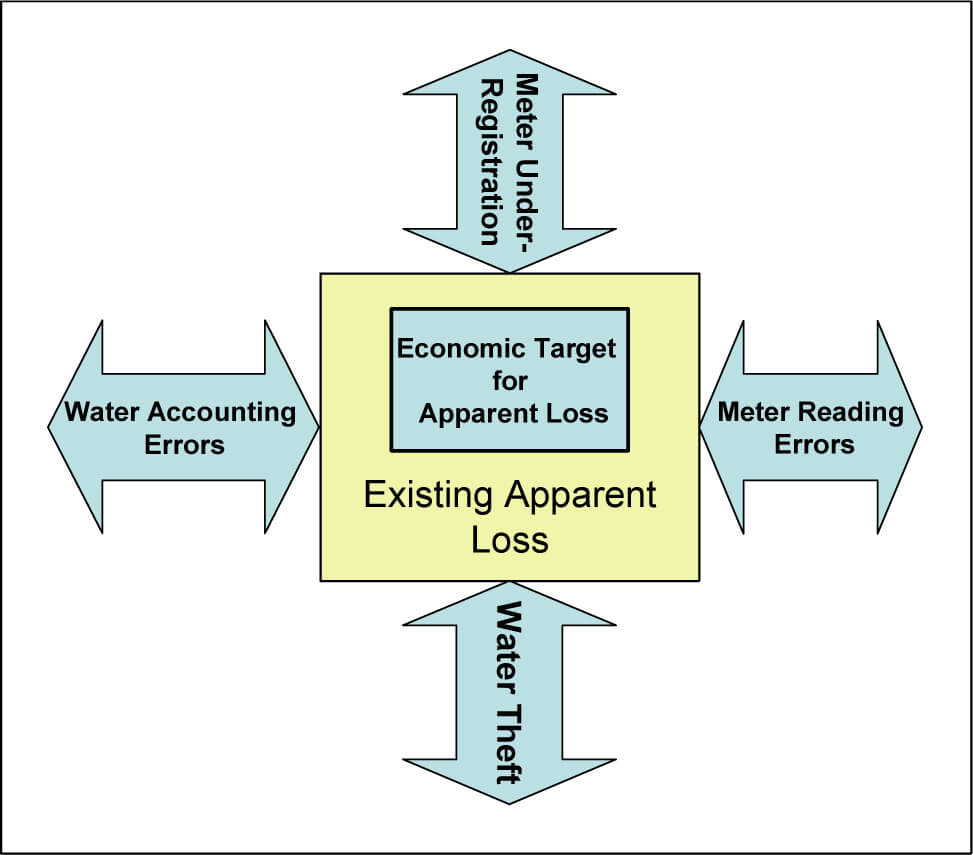 For example, meter under-registration can be positive (instead of negative) due to the effect of jetting on singlejet water meters, and this may camouflage the effect of, say, water theft. A second example is incorrect meter readings that may be hidden by a billing system that implements estimations on all readings that do not match past billing data. The four components are briefly described as follows: Meter under-registration consists of the inability of a revenue water meter to accurately measure flows, especially the lower flows. This tends to increase with time and as the meter degenerates. Several types and makes of water meters exist, each with their own particular characteristic, such as: volumetric, single-jet, multi-jet, turbine, woltmann, smart meters, etc. Water theft is easy to conceptualize and consists usually of bypasses to the water meter, illegal connections, or willful damage to the water meter. Meter reading errors consist of mistaken, or intentionally incorrect meter reading mistakes. Water accounting errors consist of billing anomalies, such as computer-based estimations that do not reflect actual consumption values. An important outcome of the Task Force’s Apparent Loss Team has been regarding the performance indicator for measuring Apparent losses. The Team emphasizes that measuring Apparent losses as a percentage of water supplied as misleading and overtly simplistic. A recommendation
being made is to utilize a similar concept to that of Real losses and the Infrastructure Leakage Index (ILI). For Apparent losses a base value of 5% of water sales is recommended as a reference, and the actual Apparent loss value calculated against this benchmark. The performance indicator would appear, for a specific area, as follows:

One has to understand that, not only are Apparent losses multidimensional, but they are dynamic in nature. For example, replacing stopped meters over a 5-year period will solve part of a problem but, at the same time, the remaining meters will have aged further. As another example, improving upon meter readings by adding discipline to a meter reader work force may reduce reading errors but may also reduce water theft. To resolve these many complexities, an integrated Apparent loss strategy must be implemented by the water utility. Figure 2 below gives an example of the many thrusts that a strategy may include. In the background to the strategy is the concept of change, and the fact that this is essentially a ‘change project’. The management of a utility would do well to remember that ‘every change needs a champion’. 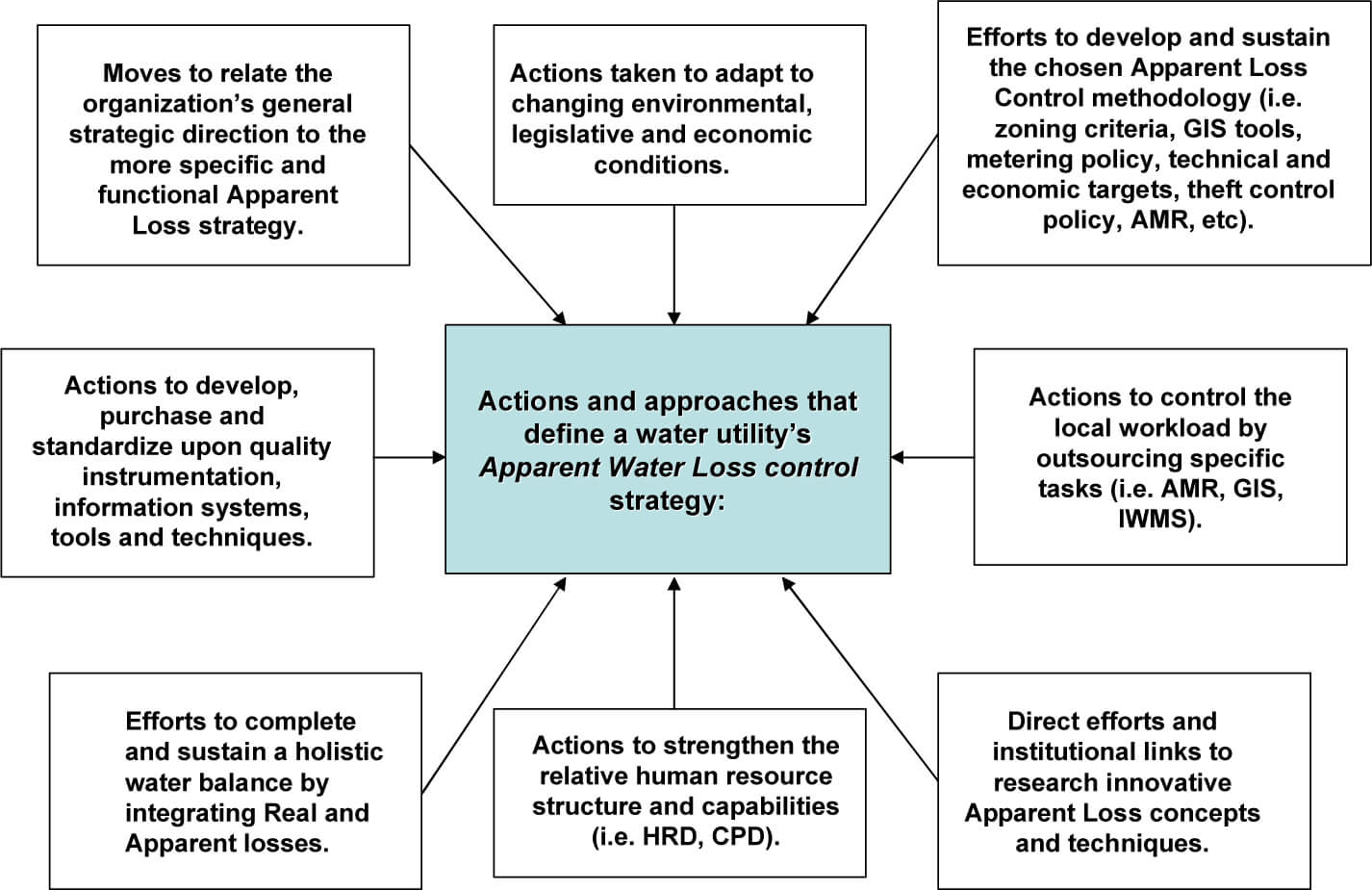 How to carry out an Apparent Water Loss Audit

Many water companies attempt to build a complete water balance for their area of jurisdiction before attempting the more important small scale trials and audits. It is imperative that a water company can study both Real and Apparent water losses on a small and focused scale before attempting national or regional water loss studies. The methodology below shall describe how a highly informative small-scale water audit exercise can be launched, and makes reference to one such pilot exercise. The example to be used went one step further than just quantifying Apparent Losses, it trialed out two innovative techniques that the particular water utility was interested in. These were Zigbee-based Automated Meter Reading (AMR), and a flow manipulation device; the Unmeasured Flow Reducer (UFR). The audit methodology is segmented into five important stages, which will be briefly described below together with results on the chosen pilot zone.

Stage 1: Choice of Pilot Zone. Ideally a small, hydraulically encapsulated zone with between 20 to 50 consumers would be identified. A suitable approach is to choose the zone based upon two criteria; a) the layout of the water distribution network, allowing for the chosen segment to be isolated, and b) the ages of the consumer water meters. This second point is important because the audit will look at meter ageing and performance in particular. As an example, two zones in Malta were identified with between 20 to 30 consumers, and networks fed through solely one entry point. Of the two, Poezija zone showed a healthy distribution of meter ages, whilst Fenech zone showed a predominance of new meters with under 500 cubic metres of flows registered (see Figure 3 below). For this reason the Poezija zone, with 26 domestic consumers, was chosen for the pilot audit. All consumers boasted ageing volumetric class D (Qn = 1.0m3/Hr) water meters. 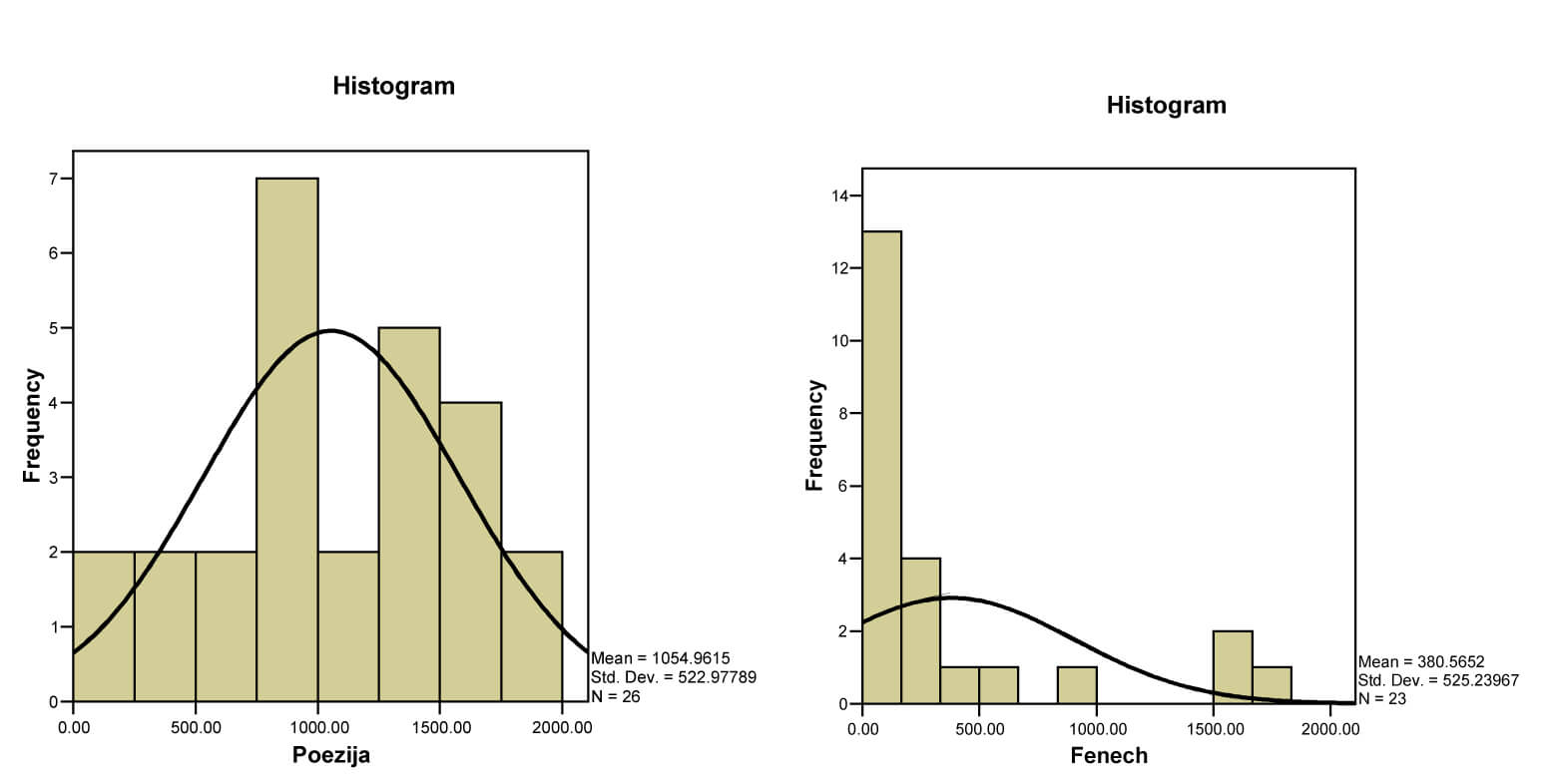 Stage 2: Metering of pilot zone inlet flows. This is possibly the most important step, and is often got wrong. The whole purpose of a water audit is to rigorously compare the summated consumptions of the individual consumer meters with the flows entering the zone. Thus, the water meter measuring the zone’s entry flows must be well calibrated and correctly sized. As an example, the first water meter installed at the Poezija zone’s inlet, a Schlumberger woltmann 40mm (nominal diameter) meter, was too large to measure the zone’s night flows, as visible in the graph below. The meter was removed and replaced with a smaller Elster 15mm (nominal diameter) volumetric meter, which is shown to correctly measure even the lowest flows entering the zone. Data logging of the zone inlet meter should be used to indicate whether the flows being measured are above the meter’s minimum registering flow (Qmin) and below the meter’s maximum registering flow (Qmax). Data logging is usually carried out via pulse count (not event logging), and on a 15 minute interval.

Stage 3: Monitoring of the zone meter and individual consumer meters. The audit exercise will consist of repeatedly comparing zoned inflows with the summated consumption of the individual consumer meters. This will give the value of the total Apparent loss. As Apparent Losses have been shown to consist of 4 components, an important point is to study these components in isolation as opposed to collectively. Also, Real losses must first be removed from the picture by either physically removing all leakages, or by calculating the leakage component from the minimum night flow of the zone and then deducting this value from the equation. The first Apparent loss component that can be analyzed is water theft. Comparisons between summated consumer meters and the zone inflows should be made before and after any water theft case is found, allowing for a calculation of the volume of water being stolen. Following this, two additional Apparent loss components can be analyzed, those of meter reading errors and water accounting errors. A quick but effective approach is to compare the difference between summated consumer meters and zone inflows for two different scenarios. The first scenario is the existing one, possibly consisting of manual meter readings that are analyzed through an existing billing system. The second scenario consists of automating the water meters, and studying the difference between manual and automated meter reading (AMR). The introduction of AMR should eliminate meter reading errors as well as billing system errors, such as haphazard estimations for closed premises. In the Poezija pilot zone, Zigbee-based AMR was deployed (see Figure 5 below). The small transmitters that are connected to the consumer meters pass along the data between each other, creating a network mesh that automatically relays data to a collection point, at which point the data is sent via GSM to an office PC. 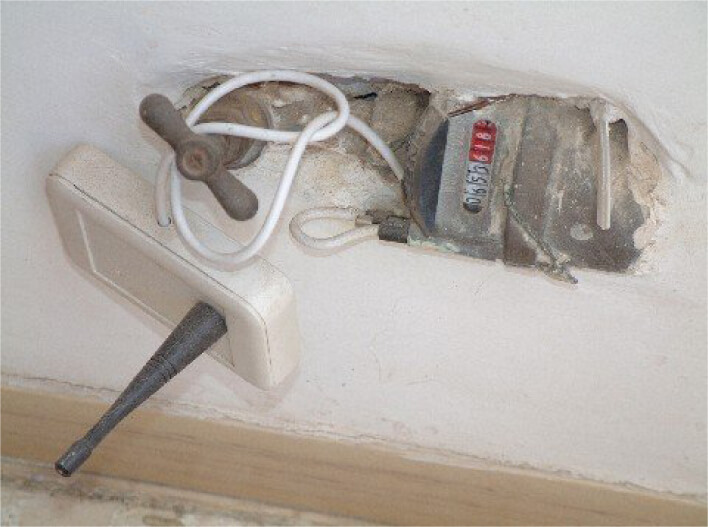 Stage 4: Trialing innovative Apparent loss reduction techniques. A water utility that has gone as far as automating a pilot zone should benefit from this and trial out different solutions to the final problem, that of meter under-registration. Various solutions exist such as replacing the meters in question, installing quick shutoff valves on roof tanks (for indirect plumbing systems), or installing flow manipulation devices such as the unmeasured flow reducer (UFR). At low flows the UFR causes water to pulse through the meter at flows above the minimum accurately measured flow for that meter. At higher flows the UFR opens up, allowing water to pass unobstructed. Installing UFR devices in series with each consumer meter allows one to study the meter under-registration value for the zone without UFR’s (i.e. by opening their bypass valve) and then with UFR’s. In the Poezija zone, application of the UFR units increased the metered volume of water by a substantial 5.5% to 6% of the water supplied to the zone.

Stage 5: Studying the financial implications and extrapolating to the wider context. This final stage is all important, given the need for a water utility to justify all planned future expenses. Calculations must be made on the financial value of each Apparent loss component, and results extrapolated to the region of jurisdiction. Care must be taken that the pilot zone is representative of the larger context, if not, a umber of pilots are required. Calculations should be made on the payback period and the net present value (NPV) for the various components of Apparent loss control. As an example, if the results of applying UFR on the Poezija zone are extrapolated over the complete jurisdiction of the relevant water utility, an increase in annual revenue to the tune of Euro 1.3 million would be gained, or alternatively a payback period of 15 months would be achieved. Obviously other issues come into play, such as the reliability of the chosen solutions and how these may deteriorate with time. These issues have to be studied over a timeframe, allowing for the water utility to gain confidence in possible solutions to the Apparent loss problem.